An 18-year-old has been identified as the gunman who broke into a Texas elementary school and murdered at least 19 children and two teachers.

Salvador Ramos was “the quiet guy” who hinted at an attack on social media and bought two assault weapons after turning 18.

It is the latest mass shooting in the United States and the worst school shooting in nearly a decade.

Mass shooting began when the suspect shot his own grandmother, who survived, authorities say.

He then crashed his car near Robb Elementary School in Uvalde, Texas, a town about 130 miles west of San Antonio, before launching a bloody rampage that ended with a bullet fired from the police.

Governor Greg Abbott said Ramos had been a student at Uvalde High School and a resident of the community of some 16,000 people.

There he launched a bloody rampage that ended in his murder by the police. The motive was not immediately clear.

In order to find a motive for the horrific attack, the police are investigating his two social media accounts.

The teenage shooter had hinted on social media that an attack could happen, according to state senator Roland Gutierrez, citing state police.

He noted that Ramos, who he says was born in North Dakota, bought two “assault weapons” after he turned 18.

Before heading to school, Ramos opened fire on his grandmother with two military-style rifles he bought on her birthday, Sen Gutierrez said.

“It was the first thing he did on his 18th birthday,” he said.

US President Joe Biden later said, “The idea that an 18-year-old can buy assault weapons is wrong.”

The grandmother was later airlifted to hospital and survived the shooting, officials said, although her condition is not known.

Investigating police believe the shooter posted photos on Instagram of two guns he used in the shooting.

Officers were also looking into whether he had made any statements online alluding to the attack in the hours before the assault, a law enforcement official said.

The official added that police served several search warrants on Tuesday evening and collected phone and other records.

They were also trying to contact Ramos’ relatives and find the guns.

Suspect posed with guns and worked at a fast food chain

Police say Ramos acted alone in the act and allegedly abandoned his car in front of the school.

Officers attempted to engage the suspect, wearing a body armor, before he entered the school grounds with a handgun and possibly a rifle.

Photos on his social media show him posing with what appears to be a semi-automatic weapon.

A few days before the attack, photos reportedly posted by Ramos on Instagram include what appeared to be a Daniel Defense AR-15 with a high capacity magazine. Another image from April 28 showed someone holding a magazine.

According to CNN, Ramos texted a former classmate photos of a gun and a bag full of ammunition days before the attack.

“He was messaging me here and there, and four days ago he sent me a picture of the AR he was using…and a backpack full of 5.56 rounds, probably like seven mags “said the former classmate.

“I was like, ‘Bro, why do you have this?’ and he was like, ‘Don’t worry about that,'” the student said. “He then texted me, ‘I’m very different now. You wouldn’t recognize me.'”

The Daily Dot reported that one of Ramos’ Instagram friends shared a screenshot Ramos sent showing a receipt for a gun he bought from Daniel Defence, a gunmaker.

Another former classmate, who asked not to be identified, told CNN that he and Ramos were somewhat “close” and played Xbox together.

He added that Ramos was a fan of the Call of Duty shooting and fighting game.

The Washington Post claimed Ramos was ‘bullied’ as a child, with one pupil saying his lisp made him a target, while others said he endured gay slurs and was teased because of his clothes. 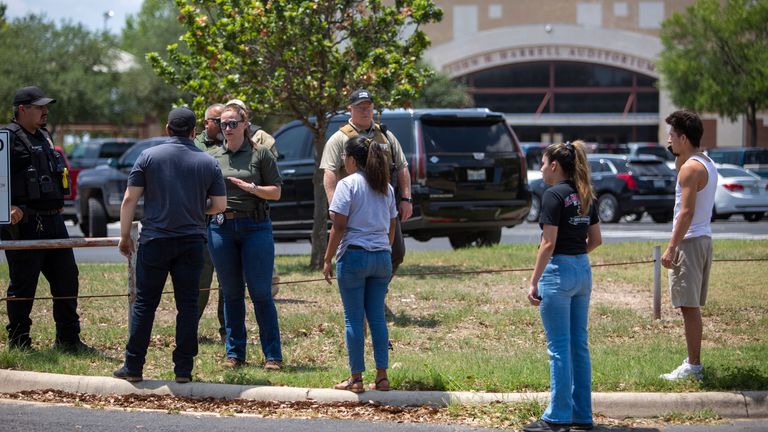 Texas shooting: 19 children among the dead

“Silent type” with an aggressive tendency

Meanwhile, an official at local Wendy’s – a major fast-food chain in the United States – said Ramos worked day shifts at the restaurant.

“He felt like he was the quiet type, the one who didn’t say much. He didn’t really socialize with the other employees,” Wendy’s party manager Adrian Mendes said.

But a young woman, a former colleague of Wendy’s, detected an aggressive side, reports the Daily Beast.

“He was sometimes very rude to the girls, and one of the cooks, threatening them, asking, ‘Do you know who I am?’ And he also sent inappropriate text messages to the ladies,” says the former colleague, who wished to remain anonymous.

“At the park, there were videos of him trying to fight people with boxing gloves. He was taking them with him.”

Wendy’s colleague added that Ramos didn’t seem to socialize much outside of his clique of friends – a group she described as “emo” or “alternative”.

Tuesday’s Uvalde tragedy marks the deadliest school shooting in Texas history, adding to a grim record of mass shootings in the state that have been among the deadliest in the United States in the past five last years.

3 Jun 22 malek
[ad_1] In early March, as the US and its allies launched a wave of sanctions…
Latest News
0